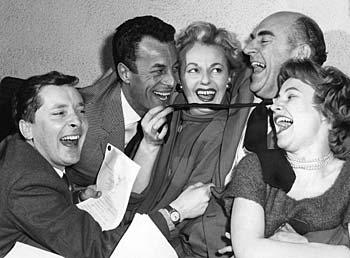 Beyond Our Ken featured characters similar to those later featured in Round the Horne, for instance Betty Marsden’s Fanny Haddock (which parodied Fanny Cradock). It was also notable for Pertwee’s Frankie Howerd impersonation, Hankie Flowered, and Hugh Paddick’s working-class pop singer Ricky Livid – the name being a mickey-take on contemporary pop singers’ stage names such as Marty Wilde and Billy Fury. Another favourite was Kenneth Williams’ country character, Arthur Fallowfield, who was based on Dorset farmer Ralph Wightman, a regular contributor to the BBC radio programme “Any Questions?” Fallowfield’s lines were full of innuendo and double entendre – on one occasion Horne introduced him as the man who put the sex in Sussex. Fallowfield’s reply to any question began: “Well, I think the answer lies in the soil!” On one occasion, Paddick’s character Stanley Birkenshaw, aka “Dentures”, who would re-appear in Round the Horne, gave a noble and rather damp version of Hamlet’s soliloquy: ‘To be or not to be, that issssssssssh the quesssssssssshtion…’

Williams and Paddick also played a couple of camp men-about-town, Rodney and Charles, in many ways

(although not as extreme), a precursor of Julian and Sandy in Round The Horne.

By 1964, Eric Merriman was very much in demand for television work and decided to end writing Beyond Our Ken. Because of the show’s huge success, the BBC were determined that the comedy series continue.

The show’s name had to be changed because Merriman had given Beyond Our Ken its original title. Barry Took returned together with Marty Feldman, to write a new series with the same cast which became Round the Horne and was one of the most popular and influential shows of its day, despite having a shorter run. Without Beyond Our Ken, Round the Horne would not have existed.

Beyond Our Ken – I’m Not in Love

Listen to Beyond Our Ken on the British Comedy Channel from the ROK Classic Radio Old Time Radio Network!