Opening in 1875, the Crime Museum at Scotland Yard is the oldest museum in the world purely for recording crime. The name “Black Museum” was coined in 1877 by a reporter from “The Observer”, a London newspaper, although the museum is still referred to as the Crime Museum. It is this museum that inspired The Black Museum radio series, produced in London by Harry Alan Towers. 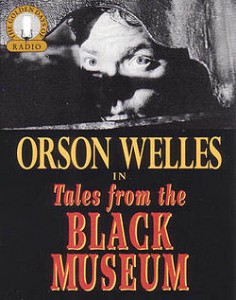 The series continued to be offered in syndication and was heard on AFRTS broadcasts and in the US on NPR stations through the 1960’s, 70’s and 80’s. Some shows were broadcast by the BBC in England in 1994.

This murder mystery series was based on true life cases from Scotland Yard’s files. Each episode was based on an item or items of evidence in the museum.

Orson Welles hosted and narrated the shows. Mr. Welles opened each show slightly differently but followed a standard format. For example, the show, “The Bathtub”, open as follows:

“This is Orson Welles speaking from London.” (Big Ben starts chiming in the background). “The Black Museum, repository of death… Here, in this grim stone structure on the Thames which houses Scotland Yard, is a warehouse of homicide, where everyday objects, a piece of wire, a chemist’s flask, a silver shilling, all are touched by murder.” (dramatic music)

Following the opening, Mr. Welles would introduce the museum’s item or items of evidence that was central to the case, leading into the dramatization. He also provided narration during the show and ended each show with his characteristic closing from the days of his Mercury Theater of the Air, remaining “obediently yours”.

Harry Alan Towers produced the series from scripts written by Ira Marion. Music was composed and conducted by Sidney Torch.

The museum was not open to the general public. It’s purpose was then, and still is, for police training, although it did receive a considerable number of famous people, including Sir Arthur Conan Doyle. It is currently used as a lecture theater for the police and like bodies in various subjects of Criminology. But, thanks to Mr. Towers and Mr. Welles, we can still get a glimpse of what secrets are housed in The Black Museum.

The Jar of Acid

One thought on “The Black Museum Radio Series”