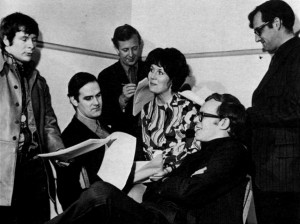 It was first broadcast on 3 April 1964 – the pilot programme having been broadcast on 30 December 1963 under the title “Cambridge Circus” – and the ninth series was transmitted in November and December 1973.

The title of the show comes from a sentence commonly used by BBC newsreaders following an on-air blooper: “I’m sorry, I’ll read that again.” Having the phrase used to recover from a mistake as the title of the show set the tone for the series as an irreverent and loosely-produced comedy show.

Regular characters of the radio show

The Director General of the BBC
played by John Cleese. Continually sends memos to the ISIRTA team with the most ridiculous requests.

American Continuity Man
is a parody of Hughie Green usually played by Oddie, although on one occasion in the 3rd series, he’s voiced by Garden.

is a character adopted by Bill Oddie to sing the playoff.

Grimbling
voiced by Bill Oddie, Grimbling is a “dirty old man” who often appears as a groundsman, butler or some similar profession.

Lady Constance de Coverlet
is a ridiculous female character played by Tim Brooke-Taylor. Lady Constance is usually introduced by a statement along the lines of “what is that coming towards us? – It’s huge – It’s a rhinoceros!” – “No, it’s me

John and Mary
John Cleese and Jo Kendall frequently performed poignant – almost romantic – dialogues as the respectable but dysfunctional couple “John and Mary”, a forerunner of the relationship between Basil and Sybil later televised in Fawlty Towers.

Masher Wilkins
A kind-hearted simpleton (played by John Cleese) who often appears as an unlikely villain or henchman. He is prone to malapropisms: “I’ve been trailing you through this impenetrable ferret– I mean ‘forest'”.

As well as obviously giving rise to The Goodies, ISIRTA shows the roots of Monty Python very clearly, with Cleese, Chapman and Eric Idle all regular script contributors. The show’s creator Humphrey Barclay would also go on to create the TV show Do Not Adjust Your Set, featuring the rest of the Python team.

As with Round the Horne, the cast’s adventures would sometimes be episodic with cliff-hanger endings each week as with The Curse of the Flying Wombat (3rd series), and Professor Prune And The Electric Time Trousers (6th series). Christmas specials normally included a spoof of a traditional pantomime (or several combined).

They had few qualms about the use of puns – old, strained or inventive – and included some jokes and catchphrases that would seem politically incorrect by the mid 1990s. Garden’s impressions of the legendary rugby league commentator Eddie Waring and the popular Scottish TV presenter Fyfe Robertson, Oddie’s frequent send-ups of the game-show host Hughie Green and Cleese’s occasional but manic impressions of Patrick Moore (astronomer and broadcaster) built these people into eccentric celebrities in a way that the Mike Yarwood, Rory Bremner, Spitting Image and Dead Ringers programmes would do for other TV presenters with similar disrespect years later.

The show ended with an unchanging sign-off song which Bill Oddie performed as “Angus Prune” and was referred to by the announcer as “The Angus Prune Tune”. Spoof dramas were billed as Prune Playhouse and many parodies of commercial radio were badged as Radio Prune, but the name Angus Prune seemed as random and incidental as the name Monty Python, which appeared several years later.

Although earlier BBC radio shows such as Much Binding in the Marsh, Take It From Here and Beyond Our Ken had conditioned listeners to a mix of music, sketches and jokes within a 30 minute show, and Round the Horne was also doing this, ISIRTA (as it was known to its friends) accelerated the transitions, and it certainly seemed more improvised. It was one of those programmes where you were unlikely to get all the jokes on first hearing so would have to listen to the scheduled repeat (or a tape recording) to discover what you had missed. It thus helped prepare the television audience for At Last the 1948 Show, Spike Milligan’s Q series, Monty Python’s Flying Circus and The Goodies. It also may have influenced other spoof-paced British radio programmes such as Radio Active, On the Hour, The Sunday Format, and The News Huddlines.

Several cast members have since appeared in the radio comedy panel game I’m Sorry I Haven’t A Clue, which was originally a spinoff from ISIRTA but has outlived it by decades. Tim Brooke-Taylor and Graeme Garden continue as regulars on the show as of 2010.