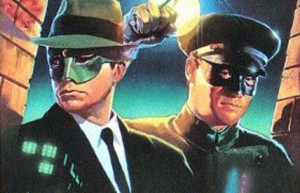 The Green Hornet is an American radio and comic book masked vigilante created by George W. Trendle and Fran Striker, with input by radio director James Jewell, in 1936. Since his radio debut in the 1930s, the Green Hornet has appeared in numerous serialized dramas in a wide variety of media. The character appeared in film serials in the 1940s, a network television program in the 1960s, multiple comic book series from the 1940s on,and a feature film in January 2011.

Though various incarnations sometimes change details, in most versions the Green Hornet is the alter ego of Britt Reid, a newspaper publisher by day who goes out in his masked “Green Hornet” identity at night to fight crime as a vigilante. He is accompanied by his similarly masked partner and confidant, Kato, who drives their technologically advanced car, the “Black Beauty.”

The radio show premiered on January 31, 1936, on WXYZ, the same local Detroit station that originated its companion shows The Lone Ranger and Challenge of the Yukon. Beginning on April 12, 1938, the station supplied the series to the Mutual Broadcasting System radio network, and then to NBC Blue and its successors, the Blue Network and ABC, from November 16, 1939, through September 8, 1950. It returned from September 10 to December 5, 1952] It was sponsored by General Mills from January to August 1948, and by Orange Crush in its brief 1952 run.

Distinguished by its use of classical music for themes and for bridges between scenes, not least “Flight of the Bumblebee,” composed by Nikolai Rimsky-Korsakov, for its title theme, The Green Hornet was “one of radio’s best-known and most distinctive juvenile adventure shows.” The series detailed the adventures of Britt Reid, debonair newspaper publisher by day, crime-fighting masked hero at night.

“With his faithful valet Kato, Britt Reid, daring young publisher, matches wits with the Underworld, risking his life so that criminals and racketeers within the law may feel its weight by the sting of the Green Hornet!”

In 1935, George W. Trendle, the WXYZ co-owner and managing partner who had spearheaded the development of the Western series The Lone Ranger, sought to bring a similar but contemporary crime-drama to air. With writer Fran Striker and director James Jewell, Trendle sought to create a series that would “show that a political system could be riddled with corruption and that one man could successfully combat this white-collar lawlessness.”

Liking the acoustic possibilities of a bee sound, Trendle directed it be incorporated into the show. The team experimented with names, with Trendle liking The Hornet, but that name had been used elsewhere and could have posed rights problems. Colors including blue and pink were considered before the creators settled on green.

The vigilante nature of the hero’s operations quickly resulted in the Green Hornet being declared an outlaw himself, and Britt Reid played to it. The Green Hornet became thought of as one of his city’s biggest criminals, allowing him to walk into suspected racketeers’ offices and ply them for information, or even demand a cut of their profits. In doing so, the Green Hornet usually provoked them to attack him to remove this competitor, giving him license to defeat and leave them for the police without raising suspicion as to his true motives.

He would be accompanied by his similarly masked chauffeur/bodyguard/enforcer, who was also Reid’s valet, Kato, initially described as Japanese, and by 1939 as Filipino of Japanese descent.[4] Following the Japanese attack on Pearl Harbor on December 7, 1941, references to a Japanese heritage were dropped.

Specifically, in and up to 1939, in the series’ opening narration, Kato was called Britt Reid’s “Japanese valet” and from 1940 to ’45 he was Reid’s “faithful valet.” However, by at least the June 1941 episode “Walkout for Profit,” about 14 minutes into the episode, Reid specifically noted Kato having a Philippine origin and thus he became Reid’s “Filipino valet” as of that point.  When the characters were used in the first of a pair of movie serials, the producers had Kato’s nationality given as Korean.  In the movie The Green Hornet (2011) the charactor Kato (played by Jay Chou) told Britt Reid that he was born in the city of Shanghai (China).

The Green Hornet was played by:

The role of Kato was originated by Tokutaro Hayashi, renamed Raymond Toyo by initial series director James Jewell.
Michael Tolan was the radio series’ final Kato. Charles Livingstone succeeded Jewell as director. Announcers who served as narrator of The Green Hornet were Fielden

Listen to the Green Hornet on the Sci-Fi & Superheroes channel from the ROK Classic Radio Old Time Radio Network!